The Prophetic Mission of the Church in Present-day Philippines 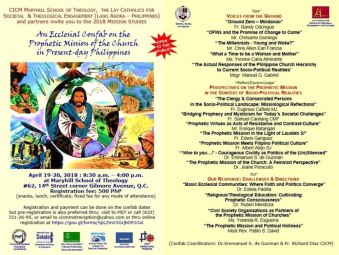 Three hundred people who are engaged in current socio-political issues in the Philippines participated in a two-day confab last April 19 and 20, 2018, held at the CICM Maryhill School of Theology in Quezon City. With the theme “The Prophetic Mission of the Church in Present-day Philippines,” sixteen presentations and discussions dealt with various theological and ethical questions vis-à-vis the populist authoritarian regime of President Rodrigo Duterte. One of the major highlights of the gathering, and which the participants shared as a Christian imperative with a sense of urgency, is to challenge the culture of silence, deceit, intimidation, violence, and the weaponization of the laws and the social media through which the present political administration has been forcibly imposing its will upon the people. This prophetic work implies converting from within the structures and practices of the churches by moving out of its “self-referential” praxis and to become a “church of the periphery” (inspired by Pope Francis) that serves and find solace in the pains and hopes of the most vulnerable people in society. The participants are unanimous that solidarity with the poor, weak, victims, and forsaken is what is called for in order to advance the common good and to reassert engaged democratic citizenship in the country today. The Confab was spearheaded by Laiki Agora – Philippines, an association of lay theologians that creates spaces of dialogue, discernment, and action on socio-political questions.