Annual Meeting 2015 of the Curatorium of the ESCT

From February 21 to 22 the international Curatorium of the European Society for Catholic Theology was held on the isle of Malta. This meeting gathers the society’s presidential board and the executive board consisting of the presidents of 21 national and regional sections. In all, the society represents 900 academic theologians from all disciplines in the field. 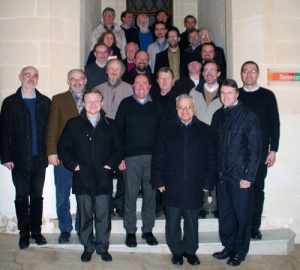 The group of the ESCT Curatorium

European conference on family and marriage

On the eve of the meeting, on February 20, a European-level symposium was organized in a collaboration of the faculty of theology of the University of Malta together with the society’s presidential board. The symposium was devoted to the theme of the family and marriage, in view of the upcoming synod of bishops. Upon invitation of the President of the Republic of Malta, Marie Louise Coleiro Preca, the conference took place at Verdala Palace, the presidential summer residence. The keynote speakers where: Prof Dr Roman Siebenrock (University of Innsbruck, Austria), Prof. Emmanuel Agius & Rev. Dr Joe Galea-Curmi (University of Malta), Mrs Aldegonde Brenninkmeijer-Werhahn (INTAMS, Belgium), Kevin Schembri (University of Malta), Prof. Dr Martin M. Lintner (Faculty of Theology, Brixen), Dr Nadia Delicata & Dr Paul Pace (University of Malta). The concluding remarks were made by Mgr Charles J. Scicluna, Apostolic Administrator sede vacante of Malta. The papers will be published by June 2015 in a special issue of Melita Theologica, the journal of the Faculty of Theology of the University of Malta.
During the symposium it became clear that the processes of transformation of family life in fact show commonalities in the entire European sphere. It was also evident that the ongoing struggle to enhance theological development and the search for pastoral solutions in view of the second meeting of the synod fathers is raising great expectations. 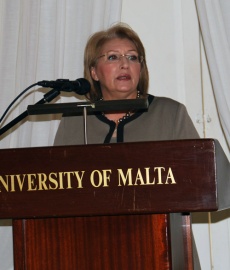 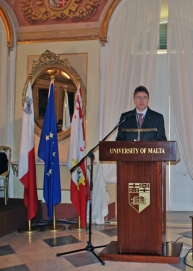 A sign of solidarity with refugees and persecuted Christians

As a society which represents catholic theologians from the entire european territory, the members of the executive board, in the closeness of the isle of Lampedusa and confronted with the situation on the Maltese islands, have also been mindful of the sacrifice made by those crossing the borders of Europe for various motives and who have lost their lives in the Mediterranean Sea while seeking refuge in Europe. In dialogue with the president of Malta is has once more become evident that the burden of care for refugees cannot be restricted to the countries in southern Europe but constitutes a duty for the whole of Europe.
The curatorium members also included in their prayers the Coptic christians who have been killed savagely on the Libyan coastline by members of IS, as well as all so many other christians who are being persecuted and murdered because of their faith. The theologians gathered in Malta have adopted the words of Pope Francis, stating that the ecumenism of the testimony in blood compels us not to remain silent on the persecutions of christians in many regions, but rather to strengthen our ecumenical solidarity. We stand before the urgent task to promote the mutual understanding between religious traditions and to demonstrate the potential of religions in order to install an enduring peace.

A concrete gesture of solidarity with Urkaine

A particular token of solidarity was expressed by those gathering through the decision to organise the next meeting, in March 2016, in the Ukrainian city of Lviv. Based on the present developments in Ukraine and in collaboration with the ‚Grazer Prozess’ the society commits itself to deepen the duty of all christian denominations to resist against warfare and to become actors of peace, reconciliation and justice.

The next international conference of the ESCT in Leuven in September 2015, 17-20

Finally, an essential part of the annual meeting consisted in preparing the society’s biannual international conference, which will be held in Leuven from September 17 to 20, 2015, and which will devote itself to the theme ‘The Soul of Theology. On the Role of Scripture in Theology’ (see: http://www.kuleuven.be/eurotheo/congresses/ET_Congress_2015/)

By INSeCT Theology in Activities of members, Europe on February 24, 2015.
← DaKaTeo Annual Conference 2015 “Education in Crisis” →