The next Network Council Meeting of INSeCT will take place at the  Pontifícia Universidade Católica de Minas Gerais, Belo Horizonte, from 17 –  20 July 2014. The Congress will be hosted by the Brazilian Sociedade deTeologia e Ciências da Religião (SOTER) with the support of the University Rector, Bishop Joaquim Giovani Mol Guimarães, and the co-operation of the Archbishop of Belo Horizonte, Dom Walmor Oliveira de Azevedo.

The local organizing committee is under the chair of Prof Valmor da Silva.

The theme of the 2014 Congress is ‘the nature, function and location of theology, with particular attention to the role of theology in overcoming power abuse in Church and Society’. In preparation for the Congress, member societies have been asked to partner in conducting research with their counterparts in other continents, so, for example, the European Society for Catholic Theology has been working closely with DaKaTeo, the Catholic Theological Society of the Philippines. A preliminary conference took place last year at St Mary’s University College, Twickenham (UK) which was addressed by Msgr Charles Scicluna, then of the Congregation for the Doctrine of the Faith (see http://www.smuc.ac.uk/inspire/redeeming-power.htm).

Until now, mainly for funding reasons, Network meetings and Congresses have always taken place within the USA. Last year, for the first time, the Executive met in Africa (in the Cote d’Ivoire), and will meet again this year in Belo Horizonte to prepare for the 2014 Congress while also giving papers at this year’s SOTER conference (see http://www.soter.org.br/). . The current Executive is very committed to realizing the Network’s goal of being a particular support to Catholic theologians working in developing countries, and this is why we have decided for the first time to host meetings outside of the USA and Europe. We also wish to maximize participation from Asia, Africa and Latin America in the 2014 event.  The Congress has initiated a vigorous fundraising campaign in order to be able to assist representatives of Network Council member societies especially from Africa and Asia to participate in the event. Priority will be given to representatives of societies that have already begin to engage with the conference theme through local conferences, symposia and publications.

Together with the Pontifical University in Belo Horizonte, SOTER is optimistic that it will be able to provide the necessary funding to accommodate delegates and host the meeting. 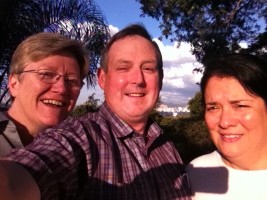